A River Beneath the Amazon 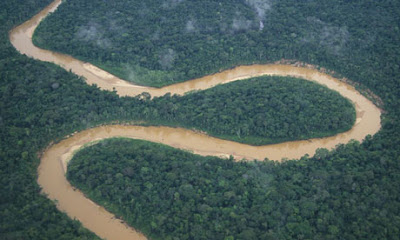 Amy and I were amazed to find out the other day that there is a subterranean river 400 kilometers beneath the Amazon river that, though the same length, is sometimes up to a hundred times wider. This is the article that she found at Guardian.co.uk titled "Underground River 'Rio Hamza' Discovered 4KM Beneath the Amazon."


Covering more than 7 million square kilometres in South America, the Amazon basin is one of the biggest and most impressive river systems in the world. But it turns out we have only known half the story until now.

Brazilian scientists have found a new river in the Amazon basin – around 4km underneath the Amazon river. The Rio Hamza, named after the head of the team of researchers who found the groundwater flow, appears to be as long as the Amazon river but up to hundreds of times wider.

Both the Amazon and Hamza flow from west to east and are around the same length, at 6,000km. But whereas the Amazon ranges from 1km to 100km in width, the Hamza ranges from 200km to 400km.

The underground river starts in the Acre region under the Andes and flows through the Solimões, Amazonas and Marajó basins before opening out directly into the depths of the Atlantic Ocean.

The Amazon flows much faster than the Hamza, however, draining a greater volume of water. Around 133,000m3 of water flow through the Amazon per second at speeds of up to 5 metres per second. The underground river's flow rate has been estimated at around 3,900m3 per second and it barely inches along at less than a millimetre per hour.

The Hamza was located using data collected inside a series of 241 abandoned deep wells that were drilled in the Amazon region by the petrochemical company Petrobras in the 1970s and 1980s. Elizabeth Tavares Pimentel and Valiya Hamza of the Department of Geophysics at Brazil's National Observatory led the work and presented their results last week at the International Congress of the Society Brasiliera Geophysical in Rio de Janeiro.

The researchers used a mathematical model to predict the presence of the underground river, based on the measured changes in temperature down the wells. In the presentation, Piementel said that the flow of groundwater was almost vertical through the rocks to depths of around 2,000m. After this, the water flow changes direction and becomes almost horizontal.

According to the researchers, the presence of the Rio Hamza river might account for the relatively low salinity of the waters around the mouth of the Amazon.

Professor Hamza said Piementel's measurements represented preliminary work on the discovery of the new river, but Hamza said he expected to confirm the existence of the flow with additional measurements within the next few years.