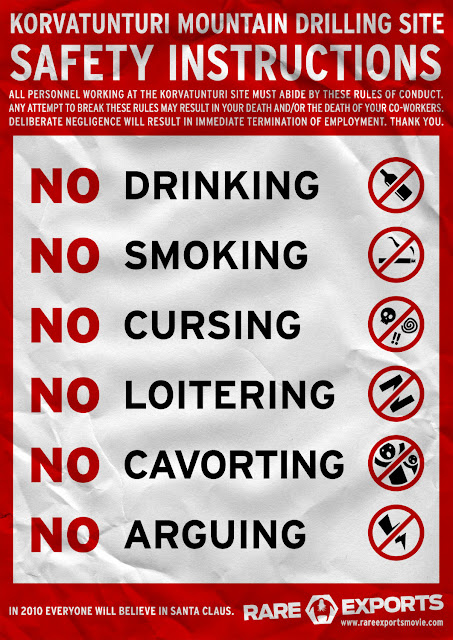 Written and directed by Jalmari Helander, the 2010 film Rare Exports: A Christmas Tale has been called Blogworthy by Cavemen Go author Justin Tiemeyer. The following is an essay inspired by the film.

I was once the leader of a high school group at a Christian Church (Disciples of Christ) summer camp in Frankfort, Michigan called Crystal Conference Center. During family camp week, our group was designated to lead vespers, which is essentially an evening worship ceremony that we held outside. As a part of this service, we were required to hold what our church calls communion, but what other churches often call the Eucharist, a common Christian sacrament involving the symbolic (or literal, depending on your denomination) consumption of the body and blood of Jesus Christ. While I had often been singled out as a spiritual leader in the church, my knowledge of ceremonies and exact Bible verses was scant at best. I could interpret passages of scripture with the best of them, but I had trouble finding said passages and I certainly did not have them memorized. I knew that there was a specific communion verse in the Bible where Jesus says something along the lines of, "This is my body... This is my blood... Eat and drink in remembrance of me," but I had no idea where to find this verse.

The communion verse that I am referring to is found, among other places, in the Apostle Paul's first book of Corinthians. It speaks of the evening before Jesus was betrayed by Judas and the ceremony that took place. Jesus breaks bread and pours wine, the bread representing his body and the wine representing his blood, an ill omen of terrible things to come, but the idea is that Jesus might be a part of his people and his people a part of him, that after his death the love that he spread might be remembered until such love comes again. When I spoke with the high school group regarding this verse, we reflected on the beauty of this moment, on similar moments we'd had with friends we might not see in a long time or ever again, and it was quite touching. It was touching until a very bright student named Brendan pointed out that we had stopped too soon. Following the "words of institution" or "words of consecration," as they might be called, was a series of verses describing what happens when the unworthy partake in communion, verses I had never spent much time reflecting upon, but which Brendan wished to emphasize: "Whoever, therefore, eats the bread or drinks the cup of the Lord in an unworthy manner will be answerable for the body and the blood of the Lord. ... For all who eat and drink without discerning the body, eat and drink judgment against themselves." The whole thing stank of penal concepts of sin and condemnation, of death and punishment.

When I heard the warning that follows the communion verse, I was unhappy with what was said. But that warning is just as much a part of the tradition that I am a part of as the words of institution themselves. As such, I am responsible also for the implications of this part of the story as well, be they translated to something like "the unexamined life is not worth living" or "children should be frightened by the responsibility of communing with God because it could very well result in eternal condemnation and death."

In much the same way as Brendan elucidated the darker side of a potentially hopeful and uplifting Bible verse, the film Rare Exports: A Christmas Tale elucidates the horrific underside of the Santa Claus/Christmas myth, and by that I don't mean the realization that you have coal in your stocking. While our understanding of the person of Santa Claus usually surrounds the legendary works and holiness of a Christian saint named either Santa Claus, Sinterklaas, Saint Nicholas, or Basil of Caesarea, imagined as a joyous old tubby fella who lives at the North Pole and manufactures toys for all the girls and boys with the assistance of a gleeful Elven work force, there are pagan stories that have influenced the construction of this figure where Santa is a force not to be taken lightly. This is the Santa Claus of Rare Exports.

The Santa Claus of this film most closely approximates the Scandinavian myth familiar to The Helander Brothers, Jalmari and Juuso, a pair of Finnish brothers who came up with the original idea behind Rare Exports. The creature that prefigures Santa Claus is an elf himself, called Tomte or Jultomten by the Swedes, Nisse in Norwegian and Danish, and Tonttu by the Finns. While these names are often derived etymologically from words for residence, home, area of influence (tomt - "house lot") similar words like tuftekall, tomtegubbe, haugebonde, meaning "mound farmer," connect both to the origin of the farm or building ground and to the idea of a burial ground. Tomte/Santa is at once both joyous protector of a farmer's home and a being from beyond the grave. Why this mythic elf was transformed into a saintly human I am not completely certain, as Santa could have just as easily been conceived as a mercurial demon who can change from caring protector to sociopathic punisher at the drop of a hat.

I think there is a clear reason why popular opinion holds on to the positive impression of Santa Claus rather than the negative impression. It's the kind of image that sells. Jolly old Saint Nick is the image that turned Christmas into the single most profitable consumer holiday on the planet. And it is not simply a day - it is a season. Businesses decide their plan for the entire year because of the way people spend their money between Black Friday in November and Christmas day in December. But I think there is something to the positive Santa myth that precedes this trend, something a little bit less dirty than big business profiting off of the poor and middle class. A Santa Claus who rewards to good and punishes the poor turns the season of Christmas into a moral event. And moreover, if the only punishment for being a bad child is a lump of coal in ones stocking rather than the ritualistic slaughter of all of your livestock, our Santa Claus myth largely employs positive reinforcement for good deeds which is proven to work better than punishment. Like with the first portion of the communion verse, our current Santa Claus myth emphasizes a hopeful view of the future, and hope is certainly a better emotion to focus on than fear.

Unfortunately, it is impossible to fully sublimate the dark side of anything. Whether you read Sigmund Freud, Carl Jung, or Stephen King, you're bound to find out that the dark side pops up here and there, when you least expect it sometimes. While we've chosen to live our lives according to the Disney version of Fairy Tales rather than the grim vision provide by The Brothers Grimm, the remaining story continues just under the surface. Is it possible to imagine a volatile Santa Claus without haunting and corrupting the dreams of children? I liken this idea to the recent Republican emphasis on fear and terror that controlled our nation for at least half of a decade, transforming good people into frightened blobs who feel justified doing whatever is necessary in order to protect their own. I think you should note that I am not criticizing the Republican platform writ-large or even the existence of a military, but I do have a serious problem with using fear as primary motivation for a nation that once motivated itself according to a dream. The fear is there. It is always there. We don't need to be reminded that we are fearful. We need to be reminded that there is a way to overcome the fear.

I think I now view Santa Claus as a bipolar creature of great power. Having said this, I begin to wonder how many people out there view the Christian God similarly. Perhaps that is a discussion for another time. How am I going to deal with this image? Well, I hope that we, as a people, can learn how to be good for goodness sake, to put our animosity aside and learn to love one another. But if some supernatural creature begins imposing excessive force against those who commit minor transgressions, then I think that we need to have to courage to stand up to this beast. We need to grab Santa Claus by the horns and send him back to imprisonment in his massive burial mound in the depths of the Korvatunturi mountains.
Posted by Unknown at 11:48 AM No comments:

Banner by Adam Friedli.
Posted by Unknown at 9:30 AM No comments:

Banner by Adam Friedli.
Posted by Unknown at 7:40 AM No comments:

Banner by Adam Friedli.
Posted by Unknown at 9:10 AM 2 comments: