Part One can be viewed here. 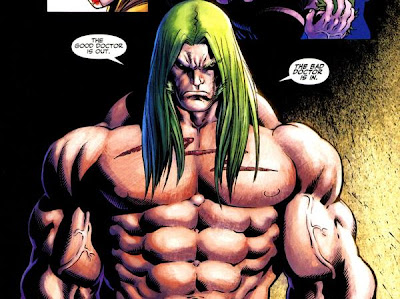 In Hulk stories, Doc Samson is a psychiatrist who was dosed with gamma radiation. He subsequently becomes a superhero with super strength and an ally of the Hulk. While he is nowhere near as strong as Hulk - his exposure was much less than Bruce Banner's - he makes up for the loss by retaining his intellect while "Hulked out."

Samson's first appearance in The Incredible Hulk is in the opening credits, where SAMSON, DR. L. is listed as a known associate. Here we are told that not only is he an associate of Dr. Betty Ross, but that he is in a relationship with her and that he is a psychiatrist. Bruce Banner's old friend Stanley later confirms that Betty is dating someone. In this scene, Samson is described as "a head shrink" and "a really nice guy."

We see Samson and Betty Ross together several times throughout the film, sometimes in heartbreaking scenes where Bruce Banner is looking upon the woman he loves and viewing her interact with another man in a seemingly loving relationship. That's gotta hurt.

But the Samson of The Incredible Hulk is more than just some interloper. He is clearly concerned for the safety of Dr. Betty Ross, which he displays by running after her when she goes running into her father's war zone. Even when it is revealed that it was through Samson's tip that the battle with the Hulk (on school grounds) was brought about, Samson confronts the General and accuses him of nearly killing his own daughter in the hunt for what might be called his green whale. After Samson calls General Ross out on lying about his intentions, Ross comments, "Where does she meet these guys?" This suggests that he feels like Bruce Banner and Leonard Samson are of the same material. They certainly are. Both are heroes, and both are given great power. 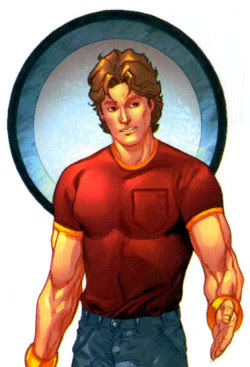 According to The Incredible Hulk #1, Rick Jones is the reason that there is a Hulk in the world. Friend to Dr. Bruce Banner, Rick accepts a dare to drive out onto a bomb testing ground. It just so happens that Banner is testing a gamma bomb at this site. Seeing Rick on the testing ground, Banner risks life and limb to push the kid into a protective trench. As a result, Banner absorbs the gamma radiation and transforms into the Hulk. Rick Jones has been a loyal sidekick to the Hulk for some time, but also to Captain America, Rom the Spaceknight, and a couple Captain Marvels (neither of whom possessing the Power of Shazam, if you know what I mean).

It's said that Rick Jones was written into the original script for The Incredible Hulk, but that Edward Norton phased him out in order to have a more robust story. This was probably a good idea, considering many comic book movies introduce too many characters and properly develop far too few. But there is a vestige of the existence of Rick Jones in the film. Much like Doc Samson, Rick Jones is listed as one of Bruce Banner's known associates. He is listed as a student and all other information about him is summer up by the word "unknown." Maybe he's been taken in by SHIELD and we'll see him in The Avengers. Maybe we'll see him in a sequel. Maybe this will be all we ever see of him. 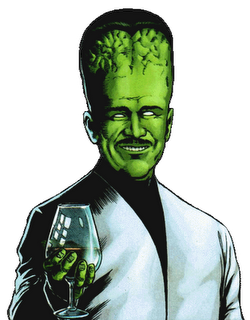 While modern representations of Hulk present General Ross as Hulk's arch-nemesis, I remember a 90s cartoon called Incredible Hulk that cast the Leader in that role. The Leader is the brain to Hulk's brawn, created similarly with a blast of gamma radiation. While Ross has the gift of military training, it could be argued that the Leader is second-to-none when it comes to strategy. His mental ability to predict the outcome of peoples' actions borderlines on precognition.

Throughout the film, Bruce Banner (as "Mr. Green") converses with a mysterious "Mr. Blue" regarding the development of a cure for his gamma-induced transformation into the Hulk. When SHIELD traces Banner's e-mail, Mr. Blue is revealed to be Samuel Sterns from the Department of Cell Biology at Grayburn College. Finally, Ross and Banner confront Sterns outside a building and we see the face of Samuel Sterns, the man who will one day become the Leader.

Sterns really seems to know what he's doing when it comes to gamma radiation. As a matter of fact, he's been doing his own testing. Using Bruce's blood samples, he's tested on rats and mice, but they got fried right away so he had to test on something bigger. This immediately calls to mind the strange gamma creatures the Leader was always surrounded by in the 90s cartoon. When Emil Blonsky forces Sterns to administer the Hulk serum to him, the good doctor get his own dose of the serum as a result of The Abomination's destruction of Sterns' laboratory. We see the serum enlarge his head and presumably his brain; we are witness to the origin of the Leader.

I think the Leader would make an absolutely fantastic main villain in a subsequent Hulk film.

Part Three can be viewed here.
Posted by Unknown at 8:41 AM