In the spirit of the Julie/Julia project in which writer Julie Powell chronicles cooking all of the recipes in Julia Child's Mastering the Art of French Cooking, 524 recipes in 365 days, I bring you the Jeff/Justin project. The Justin/Jeff project chronicles my descent into the filmography of Jeff Goldblum and will take as much time as it takes. 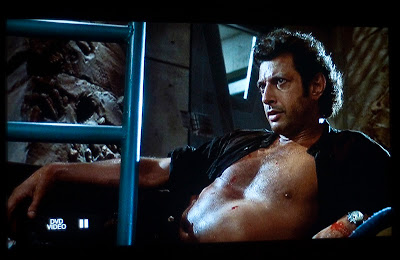 Jurassic Park is the reason that Jeff Goldblum is a household name, at least in my household, that is. In this film, Goldblum plays chaotician/"rockstar" Ian Malcolm. He is invited to a resort island in order to sign off on a strange and new project, an affordable vacation spot where people can enjoy dinosaurs resurrected due to the marvels of modern genetics. To paraphrase a classic quote, "Man is invited to island. Man is asked to sign off on project. Man sees living dinosaurs. Man is attacked by dinosaurs. Man decides not to sign off on project."

Sometimes Ian Malcolm sounds like the smartest of people. He does that really cool chaos test with Ellie Sattler where he drips water down her hand, and in the process charms her pretty heavily. He expresses his serious problems with the mere concept of recreating dinosaurs using borrowed technology and the lack of responsibility Hammond and his employees are showing. The guy really knows his stuff. And let's not forget, he humorously makes fun of Hammond when nothing works out. ("Ah, now eventually you do plan to have dinosaurs on your, on your dinosaur tour, right? Hello?") 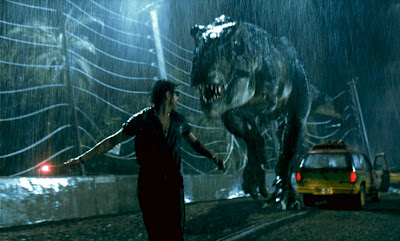 Just as often, however, Ian Malcolm sounds like an idiot. Honestly, however, I don't have a lot of examples of idiot Ian Malcolm. Of course, there's only one example I need to cite. When Alan Grant lights up the emergency flair in order to divert the T. Rex from Tim and Lex, he has completely succeeded and has the predator rerouted into the jungle. Of course, this is when Ian Malcolm stupidly grabs another flair and tries to get the T. Rex to chase him. ("Ian! Freeze!") Malcolm is badly injured. The T. Rex kills the lawyer. Alan, Tim and Lex are separated from the main group, resulting in Tim throwing up and getting electrocuted, and Lex getting sneezed on. I believe this warrants a "smooth move, ex lax."

But what is the most memorable thing about Ian Malcolm in Jurassic Park. It is the awkward classic Goldblum stutter. (From Answers.com: "Q: Does Jeff Goldblum have a stutter? A: No, he has a unique way of delivering his lines. It's sexy.") One might think that the best moment for this is while Goldblum sits alone in the JP jeep, ("See, here I'm now sitting by myself, uh, er, talking to myself. That's, that's chaos theory.") but one would be wrong. You see, Goldblum is talented enough to incorporate his stutter into his laugh. If his laugh could be written out, it would go something like this, "Chuckle. Ellipsis. Ellipsis. Growl. Chuckle. Ellipsis. Laugh." It is absolutely ridiculous. And absolutely sexy, right Answers.com girl?

If it weren't for Jeff Goldblum's performance as Ian Malcolm in Jurassic Park there wouldn't be a Justin/Jeff Project. No JP, no JJP. Thank you, Michael Crichton. Thank you, Steven Spielberg. And always, thank you, Jeff.
Posted by Unknown at 12:02 PM