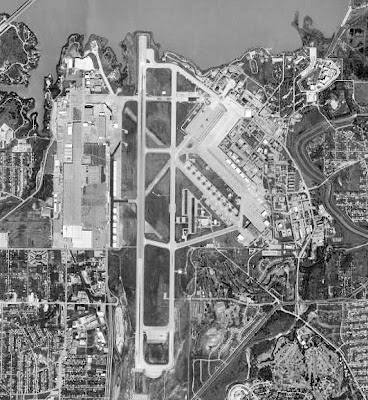 July 8, 1947 - The "object" from Roswell is flown to Fort Worth Army Airfield according to the orders of General Roger M. Ramey of the Eighth Air Force and inspected by Warrant Officer Irving Newton.

Last year at this time, I was spending my spring break investigating America's great UFO mystery in Roswell, New Mexico and the surrounding areas. This year I found myself stuck in Fort Worth for my last spring break prior to the completion of my master's degree. While it might seem boring to be stranded during spring break on the campus where you go to school and without a car, I found that instead I was right in the middle of the setting of chapter two of the Roswell story. It just so happens that the UFO debris from Roswell stopped at Fort Worth Army Air Field (Carswell Air Force Base) before being sent to storage at Wright-Patterson Air Force Base in Ohio.

Last year I was still unfamiliar with Fort Worth. By March of 2010 I had only been in Fort Worth for seven or so months. I knew that Carswell Air Force Base was supposed to be only ten or fifteen minutes from my apartment, but I had never been driven by it and had never heard anyone talk about it. Recently, I came to understand that the air field had been shut down and that Ridgmar Mall had been constructed on the Southern end of the former Air Force base.

Within a week, alien films Battle: Los Angeles and Paul were released in theaters, and the movie theater where I prefer to see my alien movies is on the grounds that hosted the Roswell object for some short period of time. Seeing an alien movie, however bad, where once stood the best known alien artifact in human history - now that's what I call a paranormal activity. Battle: Los Angeles was nothing like I had hoped it would be, but amidst the tragedy of an unsatisfying fictional alien narrative I found myself a part of America's great nonfictional alien narrative for the second consecutive spring break.
Posted by Unknown at 11:08 PM