Before I tell you which television programs based on DC comics that I would like to see on air, I want to inform you that this is part of a much bigger discussion. In December of last year, my friend Chad posted an article over at his blog Political Jesus called "Who Should Fill the Void Left By Smallville?" In this article he critiques the CW network's choice of selecting Raven as the subject of the next DC comics television program, and elevates for consideration The Graysons, Aquaman, Wonder Woman, Y the Last Man, and Starman, all of which have been at least rumored to become television programs. In a comment, Rodney, the founder of Political Jesus, suggests a Joker series or a Green Arrow series. Last month, Josh at Fat Train added his voice to the discussion with his article "DC TV." Josh suggests a couple ideas that he doesn't think are possible but loves anyways, namely Gotham and The Green Lantern Corps, before settling on The Question as the best choice for filling the Smallville void.

Of all of these choices, I found myself enamored the most by Chad's choice of Y The Last Man and with Josh's choice of The Question. Outside of casting my vote for the best choice, I'd like to add a few possibilities into the mix and see what happens. 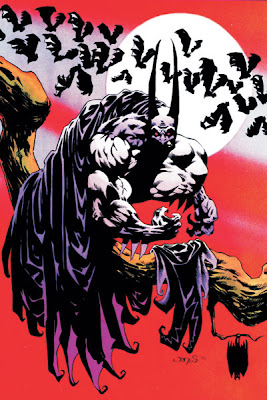 The Batman: Vampire trilogy (Batman & Dracula: Red Rain, Batman: Bloodstorm, and Batman: Crimson Mist) astounded me. Add to the fact that vampires are really popular. Bam. You've got yourself a fantastic series. Now, I'm not pandering to the whole vampire trend just for the sake of having more vampires. I'm pandering to it because it makes an easier sell for a fantastic story. After all, in every crappy trend there will inevitably arise something of genius. Batman: Vampire, if done well, could redeem the entire corpus of vampire works. I'd watch the crap out of it.
CREEPER 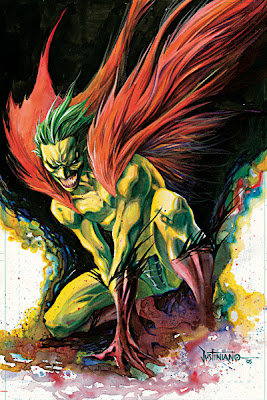 This Jekyll/Hyde character really innovates the idea of costumed superheroes with secret identities. As the Creeper he is blessed with superhuman abilities and a monstrous visage, as frightening as a demon but doing the work of a crime fighter. As Jack Ryder he is an outspoken television journalist who, and here's the kicker, conceals his identity as the Creeper by offering anyone who can reveal the monster's secret enemy a cash prize. He brilliantly cloaks himself while at the same time shooting himself in the foot. To me, Creeper has always been a very Aaron Sorkin character. We've seen Sorkin deal with influential people like presidents and social networkers; why wouldn't he be able to take on the flashy media personae of people like Rush Limbaugh and company while also dealing with important issues of the media in general through the story of DC's Creeper?
FRANKENSTEIN 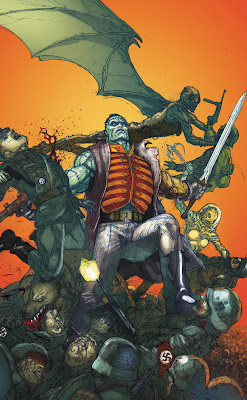 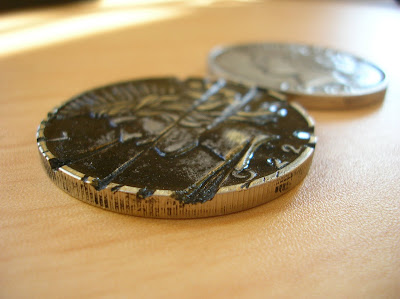 I like the idea of seeing a TV show that really delves deep into the persona/personae of Harvey Dent. There would be a couple of seasons devoted simply to Harvey Dent and his rise to the District Attorney position, but also his battle against corruption in Gotham. Eventually, Batman would be introduced as a supporting character, and with not only more mob convictions but a series of villains who are criminally ill and on trial in Dent's court room. After a little bit of this, we finally see the moment where Harvey snaps, where the acid is thrown in his face, destroying his already tenuous grasp on reality. This is a story about mental illness, but also about law and order. It is a downward spiral that raises the question of redemption. It cares first and foremost about depicting Harvey Dent in the truest possible way.
SCIENCE POLICE 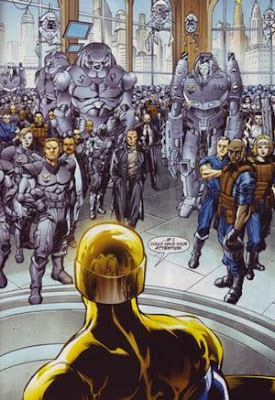 What I imagine in the pilot of Science Police is a scene that looks like a normal bank robbery in the middle of the night, an explosion, an alarm going off, criminals sneaking into the vault. This is all juxtaposed against a scene of a police department that looks really normal, people at desks, in locker rooms, etc. The police receive notice that the bank robbery is in process and things get less normal. They start suiting up in ridiculous armor and packing the most insane weapons. They pile into space age vehicles and zoom to the scene. Outside of the bank, to distract the police, is an enormous monster that the Science Police engage. With some clever thinking and some awesome gadgets the criminals are apprehended. The camera quickly pans out of the scene past hundreds of building and finally to a sign just outside of town that reads Metropolis City Limits. There would be mention of Superman here and there, and perhaps some appearances from favorite superheroes and villains, but these would be predominantly the crimes that are either below Superman's "pay grade" or that occur while Superman is busy. I think this would be best overseen by Edgar Wright and company.
PREACHER 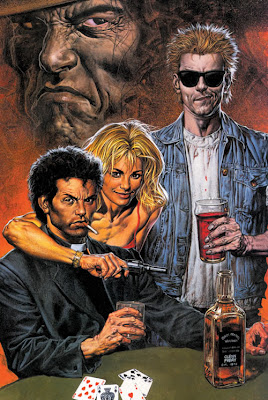 According to artist Steve Dillon there's been talk of a Preacher TV series since the publication of the first story arc. Within the last two years we came closer than we've ever come to a Preacher television program, but the deal fell apart and the property got bought out by someone else. I think there are a bunch of people out there who could do Preacher well, so I'm holding out hope that the right people get their fingers on this project.
WHEN HARLEY MET JOKER 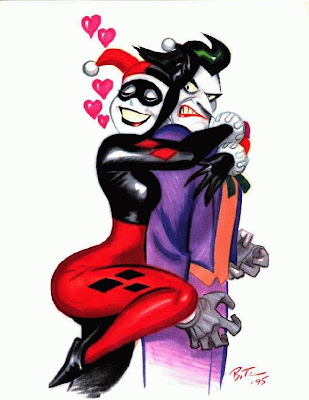 (That's a reference to When Harry Met Sally, Gabe.) When Rodney suggested a Joker series, Chad countered that "the Joker would be far too macabre and dizzying if they did it anything close to right. A show that would give you nightmares." When Harley Met Joker, however, would tell the story of psychiatrist Harleen Quinzel and her strange infatuation with the Joker, an infatuation which leads her to break him out of Arkham Asylum, follow him around, and engage in crime with him. She is infected by Joker's madness and becomes a kind of She-Joker. The Joker finds her useful at times and annoying at others. When Harley Met Joker spans the strange romance, mostly from Harley's perspective, from the day they meet until the day Joker gets too annoyed with her and decides to kill her by hurtling her into space on a rocket.
And now, as they say on the Saturday Night Live segment called "Coffee Talk," it is time for you to "Discuss."
Posted by Unknown at 10:16 PM