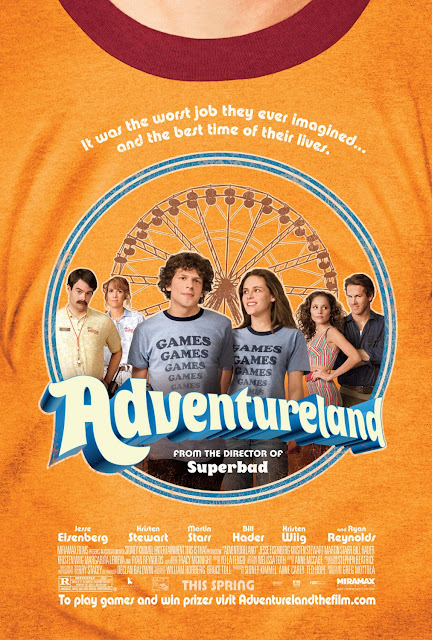 I'm sure Adventureland will never be compared with The Godfather and Citizen Kane and Clerks, but the fact of the matter is that the film, through fantastic acting (Jesse Eisenberg, Ryan Reynolds, and heck, even Kristen Stewart was good), a great soundtrack (Crowded House, "Don't Dream It's Over"), and the perfect set-up from a 1980's film (a summer job at an amusement park), made me remember how different it was to fall in love and really feel hurt by someone you love as a youth. After watching this film, I remember searching all over for another recent movie that could sustain the feeling of falling in love - at this point in my life I often found myself living vicariously through film and TV - and I think I even flipped out at my good friend Adam Friedli because he couldn't think of any. It is true that the following summer, after I watched Adventureland I had a summer romance myself that has lasted me over a year now and that will hopefully last until I die. My love is better, but I couldn't have known that I'd upstage this fantastic film when I watched it. It remains a personal favorite.
Posted by Unknown at 12:55 PM