Conan the Barbarian on Fat Train 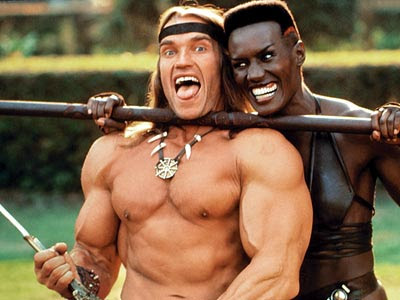 Conan the Barbarian is part of the underwhelming list of August movies that Josh Toulouse deals with on Fat Train with his article "Thoughts on the Summer Movie Schedule 2011 - Part Four." In this article, he mentions a few sequels of classic Schwarzenegger films that the former Governator ought to partake in now that he is out of office. There have already been rumors that Schwarzenegger is considering scripts for a True Lies 2, and that the Terminator franchise is seriously trying to get Arnold to sign back on. Here are the three projects that I want Arnold Schwarzenegger to get involved in now that he is potentially back in the business.

1. King Conan - As Josh has already mentioned, it would be fantastic if Arnold Schwarzenegger would return for one last Conan movie. Every movie has promised that Conan would become a king, but not before a long series of adventures and quests. I think that King Conan should start with the classic picture of Conan sitting on a throne (you know, the picture that the other Conan movies end with). But something pops up that threatens not only Conan's kingdom, but the entire world. (Christian missionaries? The Crusades? No. I think the Conan series happened before all of that. Something even scarier...) In the classic formula of "I'm retired, for Crom's sake" but I can't see the people of this planet suffer, Conan fights his last fight. Oh, and we all forget that the Conan the Barbarian remake (and the planned sequel) never happened.

3. Commando 2 - Nobody I've pitched this idea to has liked it, but I know it is brilliant so I'll pitch it to you. Remember in Commando where the dude's like, "Hey, I'll leave these dude's to keep you and your daughter safe," and then they are immediately killed? In Commando 2, John Matrix is a grandfather watching Jenny's children because she and her husband were killed in some flood or something. Some situation comes up and there is once again reason for an armed guard. But instead of dying instantly, the threat doesn't arise until nearly halfway through the movie. In the meantime, John Matrix cockily (and hilariously) schools these young men both on how to be a good soldier and how to be a good babysitter. I just imagine Schwarznegger creeping up on them all the time and making them feel like they're in Vietnam, and criticizing them for frightening the children. I don't know why nobody likes the idea of this Arnold Schwarzenegger, Baby-Sitter type of movie (that turns into a heavy action movie), but you, my public, ought to love this idea. Because it is great.

Come join the conversation. What should the next Arnold Schwarzenegger movie be?
Posted by Unknown at 9:37 PM