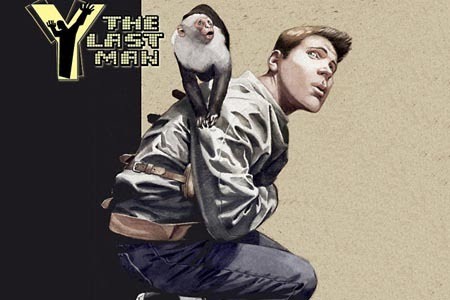 Whenever issues of politics or religion come up, the most likely situation is that some interlocutor will make some broad stroke statement and say something like, "If we wiped religion off the face of the planet, we wouldn't have these problems anymore." Y: The Last Man is a comic book series written by Brian K. Vaughan and illustrated by Pia Guerra in which a catastrophe wipes all men off the face of the planet save for a man-child named Yorick and his pet monkey Ampersand. I've thought long and hard about whether I felt I could recommend this series to everyone I know. On the one hand, the adventure is interesting and humorous and filled with references, but this doesn't really make it stand out. On the other hand, the issues and statistics surrounding gender issues are incredibly interesting, and in comic book form this series makes deep and difficult topics easily accessible to any reader. Vaughan is not trying to pin all the crimes of humanity squarely on the shoulders of the male gender, but at the same time he's certainly not giving men a get out of jail free card. (I'm supposed to insert a Catholic joke here, nyet?) I think you'll be hooked on Y: The Last Man pretty quickly if you just pick up a volume or two.
Posted by Unknown at 8:43 PM