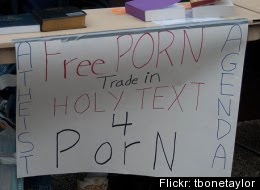 Atheist Agenda, a student group at the University of Texas-San Antonio, kicked into gear their "Smut for Smut" program recently in which students are encouraged to trade in their Bibles for pornography.

I'm kind of bored with the religious and political implications of this story. What I'm interested in is the economical implications. One could really make some money through "Smut for Smut." Let me explain.

In many towns in Texas if you go downtown in the evenings you're likely to find Bible-thumpers on street corners passing out New Testament tracts and entire Bibles. There is a good chance for any given Texan to stockpile a massive arsenal of religious texts. The trouble is that because you can get Bibles for free, there is just about no resale value. Why buy the cow when you can get the milk for free? 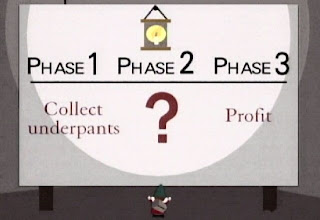 What does one do with a closet full of Bibles? Trade them for pornography. If the pornography is lightly used or new - no sticky pages - you have a profitable product. Even if it looks used, talk your buddy at the video store into shrink-wrapping it. Video stores generally have shrink-wrapping equipment in order to sell rentals as previously viewed videos once they're not rented as often.

Like the Underpants Gnome sketch there's a missing step to this scheme: you have to find a market for the pornography. There is a market for selling pornographic literature. This much is clear. It may be shrinking due to the internet, but it hasn't disappeared entirely. Anyone who has ever been under the tyrannical rule of a strict firewall knows this. Chances are its as simple as Ebay or Amazon marketplace.