Last Chance to Get a Good Look at Mars Until 2012 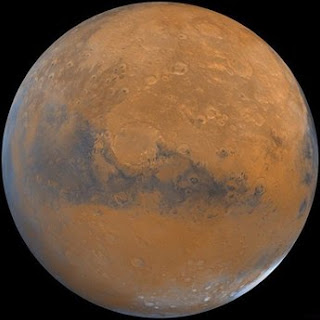 Tonight is the last night that Mars will be visible in the night sky until it approaches Earth again in 2012.


On Thursday night, March 25, many people may look up at the sky and ask the question, "What's that bright star next to the moon?"

The answer for Thursday night is Mars, but that answer changes night by night as the moon travels along the ecliptic, the path the sun, moon and planets follow across the sky. If you ask the question again on Monday night, March 29, the answer will be the ringed planet Saturn.

Such conjunctions of the moon and planets are regular reminders of how rapidly the moon moves across the sky.

This will be your last chance to get a good look at Mars until it approaches the Earth again in 2012.

The sky these spring evenings presents a striking contrast between its western half, filled with the bright stars and constellations of winter, and its eastern half, with Regulus the only bright star. Mars sits in solitary splendor in Cancer, one of the most insignificant zodiac constellations, just above the plane of the Milky Way.

But there is much lurking beyond the dim stars of spring, for we are entering the realm of the galaxies. The constellation Leo alone contains five of the brightest galaxies in Charles Messier's famous 18th century catalog of deep sky objects.

When we look towards Leo, we are looking above the plane of our Milky Way galaxy at the depths of intergalactic space, unhindered by the clouds of dust and gas which fill our galaxy.

I suggest a party. I'm sure many of you have said "Goodbye Moon" before, but who among you has ever given Mars a proper farewell? Tonight's the night we make up for lost time. Take to the great outdoors tonight and shout a memory to the sky. The time capsule of Mars will return with pictures of yesteryears in time for the upcoming apocalypse.

The original article can be viewed at SPACE.com.
Posted by Unknown at 2:34 PM