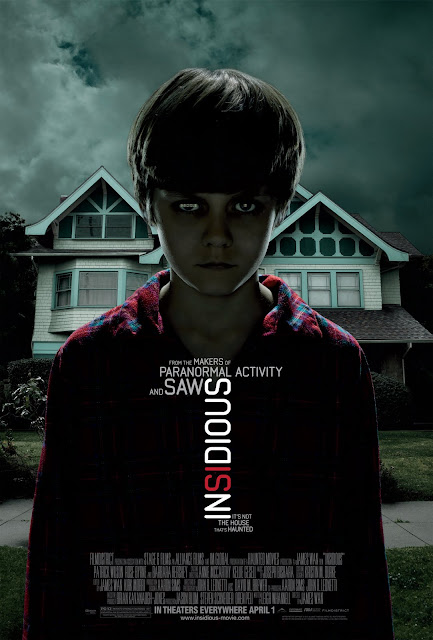 On Valentine's day, Amy introduced me to the horror genius that is Dario Argento with a viewing of his 1977 film Suspiria. I am glad that I watched Suspiria prior to watching Insidious because it helped me to understand why Insidious is being called an homage to classic horror. The use of scary violin and piano, panning and zooming for supernatural effect, and most importantly, the telling of a complete story rather than simply shadows and survival, captures Argento's horror styling fantastically.

Many agree that for at least a decade, probably more depending on your perspective on the referential films that Scream brought about in the '90s, American horror simply hasn't been cutting it. Blair Witch Project and the original Saw were fantastic, but the reality television horror films that they spawned were disappointing. In 28 Days Later, we witnessed one of the first non-Romero zombie film innovations in years, but then it fizzled into a superficial love/fear of fast zombies. The Ring was fantastic, but once the original Japanese film started showing up in American video stores the public started simply going to the source. To cite a recent example, people understood that Swedish vampire film Let the Right One In would be better than its American counterpart Let Me In.

I've been pushing for a horror renaissance ever since Sam Raimi returned to horror with Drag Me To Hell, and I predicted that it would be championed by Raimi, Jackson, Whedon and Abrams. I think that Insidious is the beginning of this renaissance, a truly creepy masterpiece - Amy and I have been terrified for several days now, hearing strange sounds everywhere - that is both a tribute and an innovation/

P.S. Read some of Neil Gaiman's Sandman before watching Insidious. You might find some interesting connections between the two.
Posted by Unknown at 6:47 PM