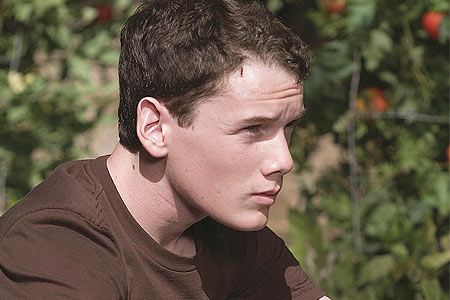 Actor Anton Yelchin. I have really been disappointed with the last two movies I've seen him in - Fight Night and The Beaver - but for some reason I'm still writing a blog about the guy (and I only write blogs about people, shows, movies, etc. that I like - leave that negative stuff for other bloggers). The simple answer: While Yelchin often chooses bad movies, he is a fantastic enough actor that it doesn't seem to matter. Whenever you see Yelchin in a film, you know that Yelchin is going to be good in that film. While Yelchin is very much himself, looking comfortable in every role I've seen him in, he's also capable of transforming into other characters, sometimes highly established characters. Consider the fact that he's played two of the best known science fiction characters of all time, Kyle Reese in Terminator: Salvation and Pavel Chekov in Star Trek. This kid is really fantastic, and I imagine that in the near future we'll see him get more and more picky with his scripts. When that happens, we will live in an age of Anton Yelchin.
Posted by Unknown at 9:56 AM