Contrary to True Blood and Fringe, very little carries over from season to season on Dexter. It's more like comedies like The Office and Community in that little bits like character development will continue from previous seasons, but each season has a particular overarching drama that is contained within one season. As such, our setup post will not be as in-depth as the weekly posts are, but we can still spend a little time getting to know where our main character Dexter is.

By the way, there will be a lot of spoilers in this post. It is assumed that you're completely up to date on Dexter. 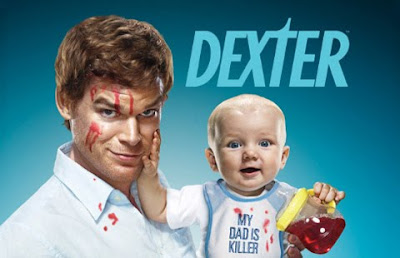 For some time, Dexter has been seeking to confide in someone regarding the fact that he is kind of a psycho killer the way he was able to confide in his father. In season three, he was able to spill his guts to Miguel Prado (Jimmy Smits) and in the previous season he was able to connect in a way that he couldn't have imagined with Lumen Ann Pierce, but neither of those people are around anymore. Also, there have been more than one occasion where the idea of coming out to his sister Deb has poked its head up. The classic, "Should Batman reveal his secret identity to such and such?" story is central to Dexter's character, and I think we'll probably have an interesting development this season. Why this season? Because I want it now, and because it has been building for some time and seems ready to come to a head.

Also, you may remember that Rita died in season four, leaving Dexter with three kids, Rita's children Astrid and Cody, and Rita's child with Dexter, Harrison. During the events of season five, however, Dexter loses the children to their grandparents. Now, Dexter has the children back, and we're going to see some heavy parenting. But when a serial killer is required to be a parent 24/7, when will he find the time to dish out his "justice" upon the murderers of Miami? Furthermore, I would imagine that this would be a good time to start teasing the nature vs. nurture issue. Since two of the children are not blood-related to Dexter and one of them is, the show can now deal with the question of whether serial killing is passed on by nature, nurture, or not at all. At the very least, we can see Dexter's fears (and hopes) that one of the children might become like him.

There are some other things going on, like the love lives and professional careers of many of the main characters, but I think these are the two deepest strains and the two that will be the most important during this upcoming season. We'll find out for sure when Dexter's sixth season premieres this Sunday, October 2, 2011.
Posted by Unknown at 7:39 AM