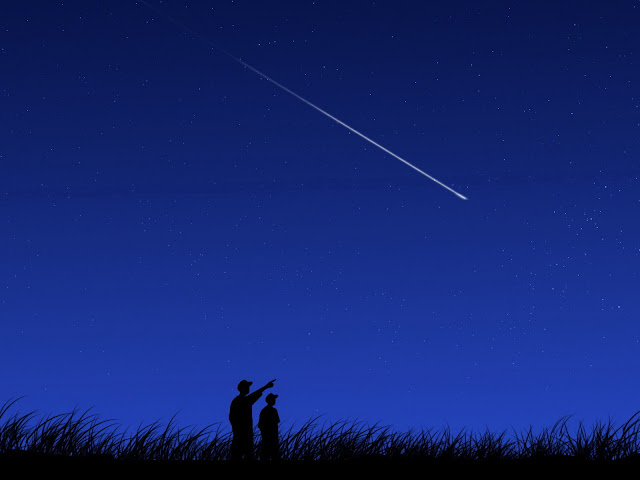 We're very fortunate that on the evenings of Wednesday, August 11, Thursday, August 12, and Friday, August 13, the best-known meteor shower, the Perseids (or Tears of St. Lawrence), will be lighting up the evening and early morning skies. I was lucky enough to witness last year's Leonid meteor shower in mid-November on a dark stretch of road in Northern Texas and it, along with the cold, cold night, was breath-taking. That's why I think you should look to the sky during the next couple of days and give the Perseids the chance to dazzle you.

The Perseid meteor shower is named after its proximity to the constellation Perseus, which will be located low in the Northeast. As a result, it is customary to watch the patch of sky halfway between the Double Star Cluster of Perseus and the zenith (directly above you). This is where you will find the highest concentration of meteor activity, but don't be surprised if they appear in other parts of the night sky.

As a bonus this year, the bright planets Venus, Mars, and Saturn can be seen in a tight cluster in the Southwestern sky (the exact opposite direction of Perseus) just after sunset, so there is an added bonus for stargazers who get out just as soon as darkness falls.

The peak times for viewing the Perseid meteor shower are from 2 AM until daybreak local time on Wednesday and Thursday evening, and around 8 PM on Thursday when Earth is predicted to cut through the densest part of the Perseid stream. But you can probably see the meteor shower just about any time during the night if you head outside to a secluded area with a low tree line and devoid of light pollution during the next couple days.
Posted by Unknown at 10:48 PM