After the publication of the first installation of the "State of Black Comic Book Characters" series, Rodney and I received a tweet from a blogger named BWilliams who just happens to be a black writer and independently publishes a comic with a strong black lead called Lucius Hammer. He pointed us to a blog post of his in which he criticized DC's history with black superheroes. While we have some differing opinions of the treatment of certain superheroes by both DC and Marvel over the years - and this is an issue I'd like to address in future posts - we agree that DC should hire more black writers and artists.

Flash forward a couple of weeks (it has been a while since I've had time to write) and the world of comic books is completely eclipsed by the Twittersplosion of veteran comic book writer and artist Rob Liefeld. If you don't know Rob Liefeld, then you're probably not reading up on DC's New 52. If the new set of monthly comic produced by DC were a deck of cards, Rob Liefeld is the guy who is in charge of the diamonds. Not really, but he is writing a lot of books. Or at least he has been: Liefeld announced that he is quitting all of his titles and will be leaving DC comics shortly. He cited problems with his editors including "massive indecision," "last minute changes that alter everything" and "editor pissing contests" as the reason for his departure. Other industry rockstars like Gail Simone (formerly of Fury of Firestorm), Paul Cornell (formerly of Stormwatch) and John Rozum (formerly of Static Shock), have spoken of similar problems, and one can only wonder if the recent announcements of Grant Morrison, Ed Brubaker, and Judd Winnick leaving the big two come from similar problems with the industry.

My point is that many of these big shots are working on multiple comics for DC or Marvel, which means that there is going to be a giant talent vacuum. Already, Scott Snyder has shown that he's ready to put in the work. Although Liefeld had some choice words to say about the Batman scribe, it is hard to argue against the brilliance of this young talent. Maybe this is also a chance for DC and Marvel to pick up some new black writers and artists. They may have to work for publishers in dire need of a change in methodology and they may get pigeonholed doing comics with already established and poorly handled black superheroes, but they may also have the resilience to weather this and give black characters some better representation. Here's to hoping.

On that note, I'd like to begin our discussion of black characters the Astonishing X-Men, Fury of Firestorm: The Nuclear Men, and Legion Lost.

There are two, count 'em, two black characters in Astonishing X-Men: Kyle Jinadu, an African Canadian (one of a couple current black characters who is often called African American not because of accuracy, but because of fear of using the word black - more on that when we get to Batwing) AV and PR exec, and Cecilia Reyes, a woman of African American and Latino descent who was briefly a member of the X-Men who was introduced in that forgettable era during the '90s with South African mutant Maggott.

Astonishing X-Men began as a Joss Whedon baby, and like most Joss Whedon babies it was great. For once, a comic book lived up to the hyperbolic adjective in its title. When Whedon completed his run, different creative teams would get assigned to the title for a limited run. It was almost an All-Star X-Men title featuring new talent every few months. When Schism divided the X-Universe into two teams, Astonishing X-Men became an ongoing continuity title and joined the Wolverine camp. It felt like Astonishing X-Men was a b-title: nearly all of the main characters were featured in other, bigger books, and the book wasn't really even advertised in the ReGenesis title banners. The book would have fallen into obscurity were it not for their decision to publish the first comic book gay marriage between Northstar and Kyle Jinadu.

I would like to state one point, and I am likely to state this point often throughout upcoming posts: X-Men was created to deal with civil rights issues. While there were no white characters in the original line-up, the mutant rights struggle mirrored the civil rights movement of the 60s, and it has been said time and again that Xavier and Magneto are meant to represent Martin Luther King, Jr. and Malcolm X. But the X-books haven't always pushed the envelope when it comes to racial justice. As is, Kyle Jinadu and Cecilia Reyes are fairly unimportant token black characters. They exist primarily as "jungle fever" romantic foils for white superheroes Northstar and Gambit.


FURY OF FIRESTORM: THE NUCLEAR MEN 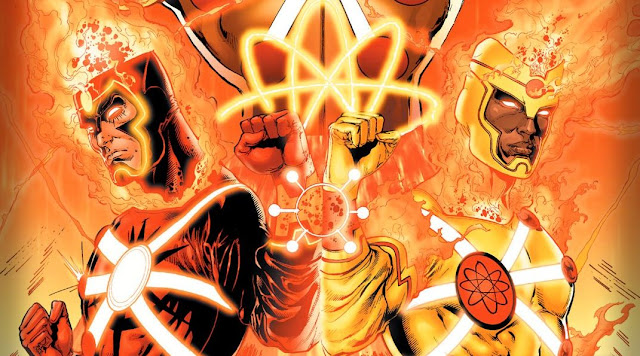 I will be honest with you. I only read the first issue of Fury of Firestorm: The Nuclear Men. And of that issue, I don't think I even read it all.

It was all there in the first issue, and I didn't like any of it. One boy was black. One boy was white. One boy was a scholar, the other a jock. The two had nothing in common. But they would have to combine their power in order to fight the awful forces of evil and bla bla bla yadda yadda yadda.

There was even a moment when white Firestorm (I refer to them as white Firestorm and black Firestorm mainly because I don't think the creative team thinks of them as anything more than that) said, "Mom, why don't we have any black friends?"

Apropos of the title, I felt furious while I was reading Fury of Firestorm. This was a  title that had the potential to carefully tease the relationships between Ronnie and Jason, two boys whose skin color put them in different worlds. But those different worlds aren't as stark as they were in the 60s. Racism is still everywhere, but it has taken different forms. This was the book that could have tackled the issues of subtle racism in the '10s better than any other, and yet it chose to be stark, to swat a fly with a rocket launcher. To quote Macaulay Culkin while he was lip-syncing the rap part in the Michael Jackson song "Black or White": "I don't want to spend my life being a color."

We are smart enough to know that the relations between black and white individuals are not black and white. Our children are smart enough to get this fact. And here's another fact we should consider: Gail Simone is a brilliant writer, and yet somehow this comic fell flat. I won't jump to blame the editors like Rob Liefeld did, but I do think we have to stop and wonder how a writer with such emotional awareness could be so blunt with her readers.

From my experience of comic book geeks, I would have to say that Legion of Super-Heroes has a cult following. I remember asking my friend Arthur if he wanted to write some posts with me and a couple friends about the New 52, and he said that he was only planning on reading Legion of Super-Heroes and Legion Lost.

I picked up the first issue of Legion Lost because I read the first issue of every new DC comic book that was published in September of 2011. And despite the fact that there were far too many characters (in both books) that I had a hard time relating to and the story felt like it started in the middle of an arc, I picked up the book once more when I found out that they were leading up to the crossover event called The Culling. After The Culling was put to shame by Night of the Owls, Avengers vs. X-Men and Ends of the Earth, I stopped reading Legion Lost once again.

I felt like Tyroc, the only black character on the roster of this future meta team, could have been a whole lot more. In fact, all of the characters could have benefitted from some better development. I like the idea that what would seem like flashbacks to these time travelers would be prophecy to both the readers and the other characters that they interact with. Unfortunately, Tyroc came off as a black version of Cyclops from  X-Men the Animated Series, whiney, lacking authority, and wearing a really awkward costume.

Is Tyroc the token black character on the team? I don't think so. I think that Legion Lost is the token DC superhero team title that hopes to succeed in a universe that has trouble supporting any team that isn't the Justice League. Tyroc could be a really amazing role model, smart and powerful, proof that in the future it is not uncommon to see black CEOs, black presidents (note the plural), black astronauts, and most importantly for our discussion, strong black lead characters in successful comic books.
Posted by Unknown at 4:48 PM